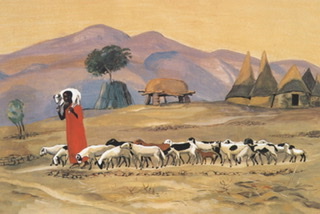 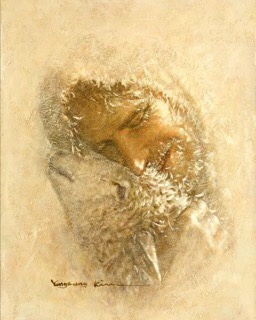 good !  It took me some time, but I did manage to access my photos again today & Ive found another “good shepherd” painting... and for anyone who finds it confusing that this is a very ‘white’/European style after the African painting above... does it really matter whether Jesus is portrayed as an African or Indian, Chinese or European ?   well... I think the answer is both ‘yes’ and  ‘no’... even more confused ?

Well... we really have no idea at all what Jesus looked like... oh there have been various legends, but they only go back to about the 14th or 15th century... not back to the first  century AD...the Gospel writers never mention what he looked like, and although its strange for us to realise, there were no phones or cameras around then, and so no first century photos !  So all we know is that he probably looked like any other first century Jew living in Palestine...often outdoors & travelling the length & breadth of the country, probably on foot & sometimes on a donkey, so he would most likely have been very brown and quite rugged. 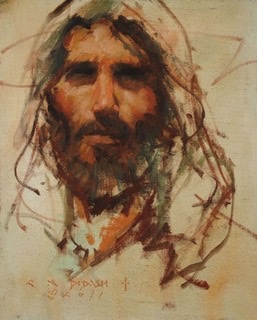 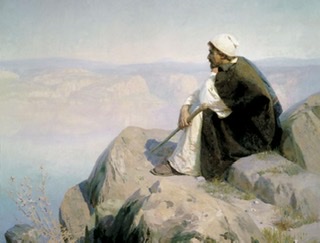 Why then do we have so many paintings of Jesus showing him as a pinkish-white’ European-looking person ?

Maybe that has more to do with the history of art and both the artists and those who commissioned them than anything else...

For the first 200 years or so Jesus was depicted through symbols eg the first letter of the alphabet elongated into the shape of a fish, or an anchor drawn with the cross-bars as a reminder of the crucifixion and resurrection... were these perhaps hidden, secret symbols ? as Christians were persecuted and put to death for their faith... ?  By the third or fourth century paintings on the walls of the Roman Catacombs [burial chambers ] were portraying Jesus as the Good Shepherd, in a Greek or Roman style of painting 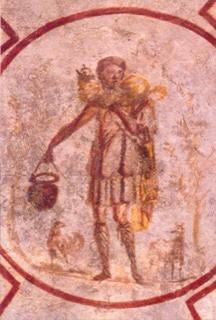 Then we have the great artists of the Rennaisancelike Leonardo &Michaelangelo...both Italians...commissioned by Italian Popes... so naturally they would have chosen an Italian model when painting their pictures or creating sculptures ...including those of Jesus... and so we have tended to follow these artists, and have somehow come to think of Jesus as a ‘white’ person, without really thinking about it...Fortunately there are several artists from different cultures & countries around the world who are now seeing Jesus through their own eyes and painting him in many different ways...Over this next week or two I will try to find you some examples of paintings of Jesus from Indian, Chinese & African  artists & more...
Posted by Janet Driver at 21:31