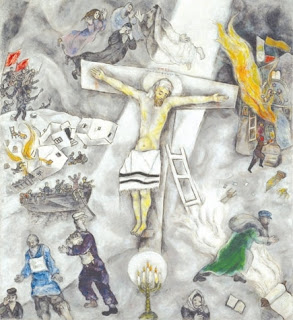 From my previous post you will see that I have attempted a contemporary version of Chagall’s work, highlighting some examples of how, 75 years later, violent persecution continues to force people to flee.

Chagall in his White Crucifixion identified the crucified Christ with the sufferings of Jews at the beginning of World War II.

I have followed a similar format, painting Christ wearing jeans instead of a Jewish prayer-shawl to identify him with fleeing refugees. 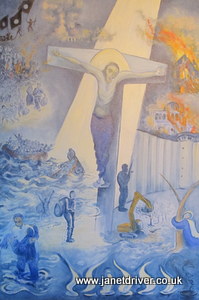 Chagall’s  Menorah at the foot of the cross has been replaced with prayer nightlights,
but the symbolism of only 6 living flames, has been kept...and I have painted the seventh light as snuffed out / blown out...

If I had taken too long to think & plan, I would probably been stopped in my tracks: there was no way I was going to emulate Chagall's style !  Fortunately that didn't even occur to me until now, when I look back on the painting process.

I decided to use the format of the Crucifixion right in the centre, rooted in the events swirling around ... so I began there,  using a thin glaze of indigo, choosing this cool, dark colour to bring out the tragedy & sorrow of all the scenes of violence...but I also wanted to include the stream of light, giving a sign of hope in this darkness.

In fact there have been many signs of hope in the news...especially of people going out of their way to help, often at great risk to their own lives...

So I have decided to offer this painting for sale during the Firstsite Exhibition as small way of raising funds for Medicans sans Frontiers                           Doctors Without Borders
where many doctors volunteer to go during their holidays to be sent with a medical team wherever they are needed...

Since completing this painting I feel I should now do a sequel...showing how events have moved on with so many thousands of refugees, including many young families, pouring through Europe... but then Chagall has already done something similar in his later crucifixion: 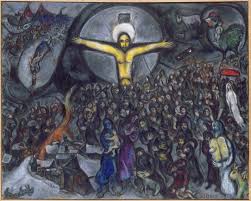 This morning one or two people were asking me about my painting, having seen it in the Exhibition at Firstsite ... and so I looked again for references to Chagall's White Crucifixion and discovered an article by Bryan Owen, who spent time reflecting in front of the painting with a Jewish friend  (click on link below ) He gives far more detail on the Jewish symbolism...and also points out parallels in modern society. It was written a few years ago, in 2007, but still contains food for thought and questioning that links in with my own painting...

Posted by Janet Driver at 16:56 No comments: