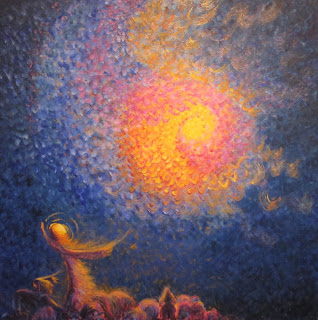 Posted by Janet Driver at 17:54 No comments:

Travelling with a group of fellow students, it must be just over fifty years ago now since I visited Bethlehem.
Entering the church of the Nativity by the low little door felt very odd, and I suppose rather humbling as we each bent down and stumbled under the lintel...By contrast, the sense of space inside seemed quite amazing.
But soon a guide began his practiced babble at us...no wonder only a handful chose to follow towards the steps leading down to “ye traditional cave, discovered centuries ago as the true birthplace of Jesus...yes, yes...ye ancient tradition...go slowly, slowly ...steps worn down by pilgrims back to time of Jesus... yes, yes... blessed be he...”
...so two or three of us began slowly down into semi darkness, the only light from intermittent flickering oil lamps, and our hands guided by the cold rough rock-face...
... until we heard the slight echoing slap of sandals coming up from below & paused to allow an Orthodox monk to pass...
he stopped and smiled in greeting...and his whole face seemed to be shining with joy...something I vividly remember, even half a century later!

As small group slowly gathered in the traditional cave of Jesus birth, now hung with tapestries, and lit by oil lamps flickering before icons... and somehow, amidst the never-ending babble of strange fables from our guide, there was an underlying silence...
...a profound sense of going back in time...
...it no longer mattered whether Jesus was born in a cave deep below ground, in a stable, the back room of an inn, or a distant relative’s animal byre...maybe this marble slab did mark the spot, who knows? But a sense of peace and deep inner thankfulness that we were part of hundreds and thousands of people from all over the world who through the centuries had come to pray in this cave...this became for me one of those profound points in life where prayer has been valid.
This was before the constricting walls were built...and now I pray for another miracle of reconciliation...

Posted by Janet Driver at 11:50 No comments:

Email ThisBlogThis!Share to TwitterShare to FacebookShare to Pinterest
Labels: " Father Forgive...", church of the nativity Bethlehem, journey to Bethlehem, walls

I wonder how you envisage these stories in the first chapter of St Luke’s Gospel ?
Maybe these paintings by artists from the Cameroon, China and USA will help you imagine Luke1v 39 f 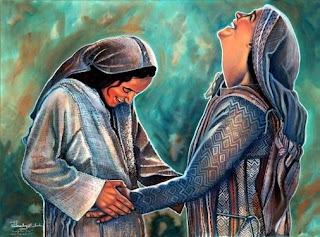 Posted by Janet Driver at 14:55 No comments: 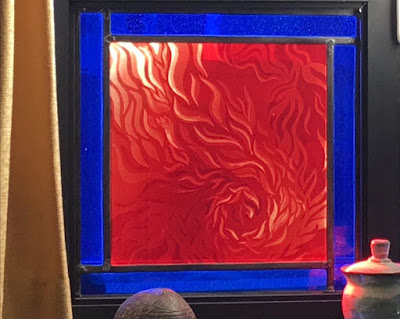 “I love the way the sun shines through this glass !  But why call it Annunciation? ...Where is the Angel ? “

The questioner was quite perplexed...and certainly St Luke describes this as a conversation between Mary and an Angel: ‘...the Angel Gabriel was sent from God...’ [St Luke ch 1 v26 f ]  I have read this many times, and even had to take the part of the Angel in  Nativity plays as a child because I was tall & could shoulder the large heavy wings!

I don't think I left out the angel... but wanted to portray a much more etherial indication of both angel and message...of the angel as an emanation of spiritual power...of light...of joy...of new  life...vitality...of something both seen and unseen...how do you describe or portray visually something so powerful and deeply spiritual ?

Hence the spiral of flaming light...the shimmering sense of wings half seen, half understood... and the sense of Mary’s “yes” with echoing flames of the Spirit throughout her being...
“the Holy Spirit will come upon you, and the power of the Most High will overshadow you...”

Whenever I see the sunlight  pouring through this glass...the deep reds dancing with flickering yellows, reflecting across the floor or lighting up someone’s hair with a halo of coloured light, I am reminded of  glimpses of the Holy Spirit in the lives of people I have met...

Posted by Janet Driver at 18:08 No comments:

You might like to share this article on research into PTSD, especially if you have known anyone going through traumatic flashbacks, anxiety etc after being in a terrorist attack, war zone, wild fire, earthquake or any similar trauma.

My father suffered terribly after his experiences in the Navy during World War ll but felt no-one knew how to help, and there must be countless people who suffered as we did from the fall out.
My father spent what little free time he had after his long working hours doing heavy gardening. He would ferociously dig the ground to plant potatoes, make celery trenches, hammer in stakes for a chicken run, and make endless bonfires after pulling up brambles & cutting back hedges.This must have been therapeutic...

I am so glad to read about this research. I wonder how my father would have taken to fishing...later on I remember he enjoyed taking his rowing boat out along the Colne estuary. It seems as though he needed strong physical exercise to combat his anger over the whole situation. But maybe there is a stage at which the stillness of fishing really helps heal these inner wounds.

What about art therapy ? 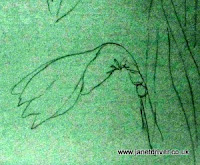 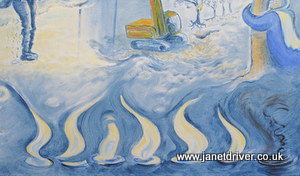 as in this detail from “Father Forgive” ( see White Crucifixion Revisited ) 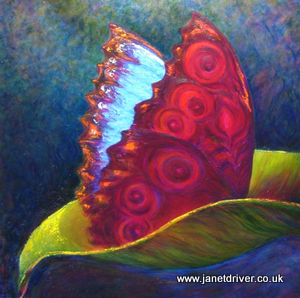 but most of my paintings are done with joy in wonders of the world around us...
Posted by Janet Driver at 12:00 No comments: 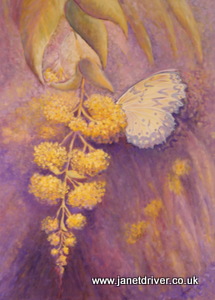 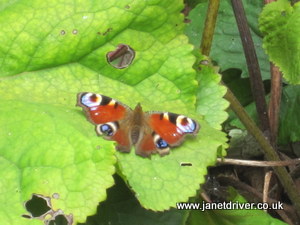 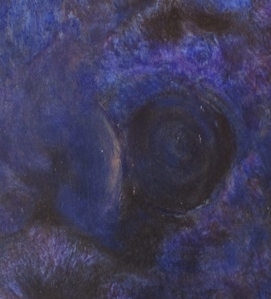 The eye of the needle

Rearranging my studio yesterday I came across paintings from a holiday in Dorset a few years ago... 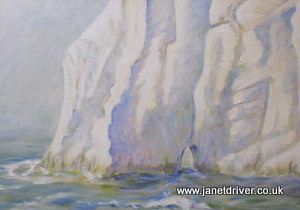 Walking along the clifftops we saw this 'Bay of the Eye of the Needle' which was apparently a source of limestone blocks highly sought after for buildings and sculpture... Watching as the sun changes the angle of shadows across the huge cliff face I was fascinated by the emerging shapes which seemed like colossal abstract faces and figures...hence this painting "Stone Carnival”.

Fascinated by the small archway...nicknamed the "eye of the needle", as local stone cutters a century or more ago had to navigate this archway rowing their boats laden with blocks of stone through to the bay beyond...keeping an eye on the rise & fall of the tide!
A google search to verify this remembered anecdote took me to Butterworth & Inkpen's lovely cartoon children's story of the camel and the eye of the needle on youtube:
https://www.youtube.com/watch?v=tb_xIIkW148
from: Butterworth & Inkpen: “The small gate”  /  “Stories Jesus Told “ 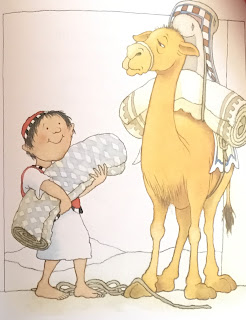 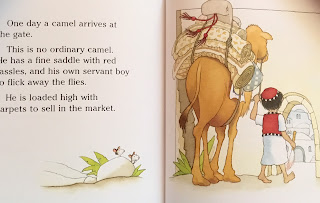 Imagine my surprise this morning when listening to the "Pray as you go" for today only to find this linked in with Jesus' saying about the narrow way... do listen and hear for yourself...
https://stmaryswivenhoe.org/news/     & on the list down the right hand side click on the
"Pray as you go" link, then click on 26th June in the calendar

* Naturally this blog contains cookies to enable it to work, and by using this blog you are consenting to the use of these cookies. I understand that Google collects data via its cookies, but I myself do not receive any of your personal data through the use of this blog or any of its links. If you give your email in order to follow this blog, I do not receive this information myself. If you wish to contact me personally by email I keep that email only in order to correspond with you & at any time you may request me to remove your email from my list.

Posted by Janet Driver at 12:44 No comments:

Email ThisBlogThis!Share to TwitterShare to FacebookShare to Pinterest
Labels: Cartoon story by Butterworth & Inkpen, Dorset, Pray as you go.

When the Sun Shines...and then the snow !

A carpet of snowdrops just outside my studio, and a curtain of catkins dancing in the cold winds... Then suddenly the sun shines...

and in the freezing snow a redwing joins our blackbirds pidgeons & magpie for the last red crabapples, whilst our cat mews pitifully looking out of her catflap wanting us to change the weather! 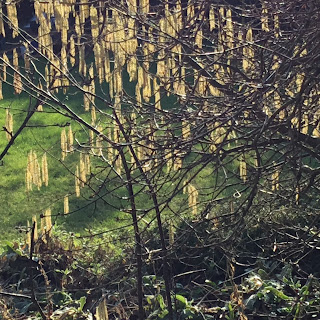 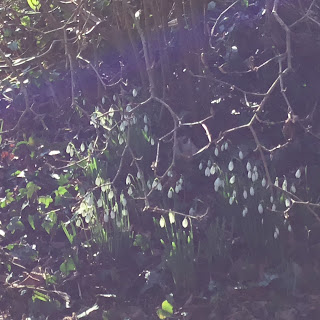 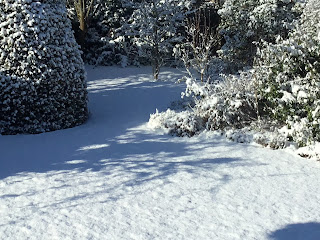 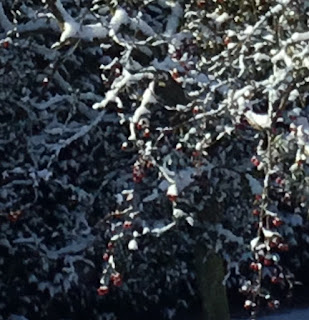 Posted by Janet Driver at 16:45 No comments:

Daffodils in December ???     ...growing outside... just after Christmas. I could hardly believe it ! 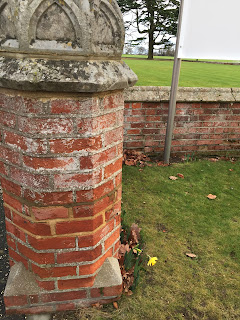 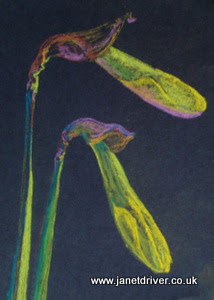 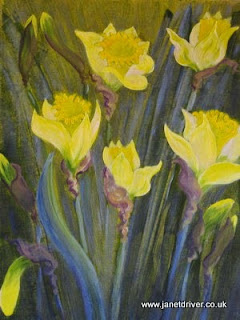 I mean daffodils growing outdoors...
Posted by Janet Driver at 15:35 No comments: 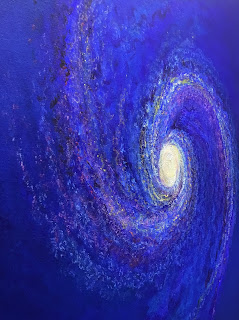 the light shines on in the darkness  [oil painting c. Janet Driver

This was painted with the prologue of St John’s Gospel in mind:

how can my mind fathom the depths of that phrase?
I may be able to remember all the decades back into my childhood;
then trace back centuries through history
to when this gospel was written
but then I need to stretch my mind back through geological time...and even further  ...

so through slowly & meditatively painting this canvas
using several glaze layers to build up the depth of blue
interspersed with spiralling colours...
thinking of all the photos of early galaxies from the zooniverse website
which challenge my horizons, stretching my mind over thousands of light years
of stars shining through chaos and dancing...
and light still shining on through the darkness...

hoping that this new year may bring more hope shining through the chaos of last year
Posted by Janet Driver at 19:54 No comments: