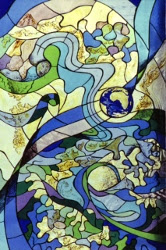 Climate Change Window
designed & made by Janet Driver in the 1990s

It must be nearly seventeen years since I was designing & making this stained glass window commissioned by the School of Life Sciences at Whitelands College, now part of Roehampton University, London.

In the 1990s Climate Change was already firmly on the agenda of the Environmental Studies Courses, and so my design includes visual predictions of increased volcanic activity, displacement of large numbers of people, tsunamis & rising sea-levels, to name just a few of the abstract images.

Even as far back as 1970s I remember discussing possibilities of alternative energy with university students; concerned young people, who realised it wasn't only a matter of curbing lead in fuel emissions, but how vital it is for the future that we move right away from fossil fuels...

... something the Guardian is now re-emphasizing with its

"KEEP IT IN THE GROUND"
CAMPAIGN
http://www.theguardian.com/environment/series/keep-it-in-the-ground

We were actively aware of the need for action on climate change at least thirty or forty years ago... how slow we humans are to adapt and take the necessary steps so vitally needed to prevent catastrophe.

Even just in the 15+ years since I made this climate change window, many of these predictions have become alarmingly true:

first the tsunami that shocked us ten years ago,
& since then earthquakes have devastated Haiti, Japan & now Nepal...
rising sea levels still threaten the Maldives... & floods have become much more frequent worldwide...
...& then last week I heard on the TV News that the current conflict in Syria was sparked off through climate change causing fighting among farming families which escalated...

and if you are still unsure, I came across an excellent book, written by an eminent Climate Scientist,
& highly readable...I mean if you are a non-scientist, like me...

In the Eye of the Storm: Sir John Houghton

....we have just a short window of opportunity ...

Posted by Janet Driver at 15:15 No comments:

this exhibition is in a lovely old church with a lot of daylight flooding through the windows to light up the paintings... Whilst deciding what to choose to exhibit, I happened to read this article about renewed violence in the Darfur area of Sudan:

and this made me decide to include the "Darfur Madonna" I painted a few years ago... 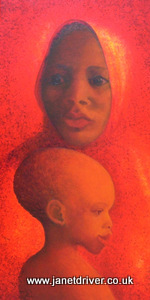 ...when the plight of refugees in Darfur first began, and pictures of hundreds of women and young children were flooding the media...I found these images so moving I made a quick sketch of one of countless women queuing for food with a young child sitting atop a pitifully small bundle of their belongings ... then began the slow process of building up dozens of thin glazes of oil paint...
a slow  meditative process
enabling me to pray whilst painting

Posted by Janet Driver at 12:24 No comments: