Wasn’t it a former UK PM who gave such an emotional speech at the Paris Climate Change meeting, asking what he / we would say to our children & grandchildren if we failed to act on Climate Change ...?

... and then what happened ?  Subsidies cut for Solar panels & the R Severn tidal project !

what was the point ? several start - up solar panel businesses had to close down...Why nip solar power in the bud just as people were beginning to put precious savings into rooftop solar panels?
And why stop progress on the R. Severn project, when we are an island nation surrounded by potential for tidal power?

Look at our children...
Listen to them...
Now we have the technology...lets do far more !


I am so thankful for Greta Thunberg and her silent vigils.
I am glad she persuaded our politicians to declare a Climate Emergency.
But what has happened since then ? 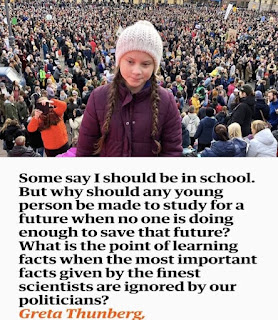 Posted by Janet Driver at 14:33 No comments: