I've used  palette knife now and then for various paintings, usually to drag a highlight over a darker colour,
or to paint textured rocks, as in this painting, based on rocks & spray along the Moray Firth... 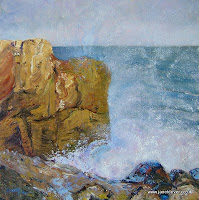 I began with the rocks, and let them dry before using the knife again to give the effect of waves splashing up and spilling out all over the rocky surfaces in the foreground.

Last week I decided to have a go with a larger palette-knife painting,
based on cliffs seen whilst walking along the Dorset coast.

This time I painted the whole picture with palette-knives... not a brush in sight.
Its all painted "wet-in-wet" too...and now just drying before adding final highlights...
perhaps after watching some Wimbledon tennis !

Here is a preview detail: 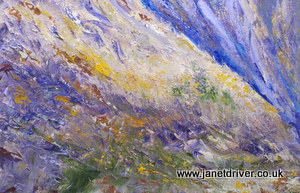 Posted by Janet Driver at 15:53 No comments:

Small group tuition
in a garden studio in Wivenhoe [ near Colchester ]

Interested in Quiet Days / Prayer Painting ?
Email me for details
& See Prayer Painting page on my website:  www.janetdriver.co.uk
Why not join in prayer painting for the people of Syria, Gaza, Iraq, Nigeria... Sudan...  wherever / whoever  you wish to pray for ...?

Posted by Janet Driver at 12:54 No comments:

This summer I hope to have paintings in local Exhibitions

& to take part in

during weekends in September 2013

I will post dates & times when my studio will be open

Posted by Janet Driver at 19:05 No comments:

paintings on the go... 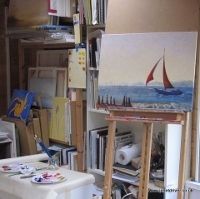 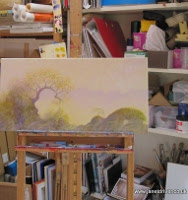 As usual, I am working on more than one painting at the same time.
I know these look incredibly different, but they are both being developed from sketches & photos of things that interest me whilst walking along the River Colne.
There were so many misty mornings earlier on, with trees looming up in all kinds of odd shapes, which became great fun to paint.

Then came sunshine dancing off the water, so bright you could hardly bear to look...and the mirage effect looking out from Brightlingsea towards Bradwell that has always fascinated me since I first saw it years ago.
I have often stared with eyes half closed against the glare thinking ...'if only I could paint that effect...' There was nothing for it but to have a go !   Like many artists, I am rarely satisfied with the result...but then that leads to further experiments...

I read just the other day that even Monet was often dissatisfied with his paintings.

Trying to communicate something of the wonder of a fleeting moment when the light bounces off the water in such a way that you stand transfixed with the sheer beauty of dazzling light...I am trying the impossible of course...but maybe, just maybe...it might trigger a similar memory in someone...

Posted by Janet Driver at 19:16 No comments: